I remember Alex English came to read his poetry at my school. That guy was as graceful off the court as he was on. Amazing Grace and Chuck as was.

I remember Danny Shayes sat in front of me at Temple one year, allowing me to sleep without the rabbi being able to see me behind the seven-footer.

I remember being the team with the most seven foot white stiffs in the history of the league—Danny Shayes, Blair Rasmussen, Tim Kempton, and Scott Hastings. That’s nearly thirty feet of stiff effort and eight sharp elbows.

I remember the decline; the depths of a slide. I remember Orlando Woolridge scoring 30 points a game for Paul Westphal’s sub .250 team. I remember changing our uniform’s right after that, hoping to forever forget those bleak days.

I remember drafting Chris Jackson and winding up with Mahmoud Abdul Raouff.
I remember Jalen Rose’s pimp outfit on his own draft day; thinking he was the next Magic. Of course I also remember him turning into an all-star with the Indiana Pacers.

I remember Dikembe rejoicing in 1994, the last time we won a playoff series before this run. I remember Rodney Rogers hitting three 3’s in under ten seconds.

It’s been a long fifteen years, to say the least. There were times when I probably couldn’t name all 7 reserves on the bench. But in 2004, when the Nuggies drafted my favorite college basketballer of all-time, the one man to ever lead my Orangemen to a national championship, when they took Melo, well, it’s been all nuggets all the time for me since then.

I also remember Chauncey Billups in high school about two miles from where I grew up. Dude was Ill before Ill was bad (meaning good.) And now, because of Chauncey’s return home; because of Melo finally proving to the rest of the basketball world what he already proved to me in 2003; because they didn’t fire George Karl like I wanted them to at the end of last season; because they brought in the Birdman instead of paying Marcus Camby; because of how much I bitched and moaned when they fired the one guy on the team who played defense last year; and because of how hard they play defense this year, now I’ll remember another Nugget team, but this time, it will have been the best yet.

My buddy, also from Denver, also from Cuse and therefore also Carmelo’s biggest fan in the Staple Center last night, got us pretty darn good seats to a pretty damn good game. Did I say ‘pretty good’, I meant goddamn! Goddamn what a game!
I thought for sure my nervous energy was making it down to the bench. That it was I who was Butterfly Effecting my team’s shots to clank, clank, clank so badly during the warm up.
I tried to fight such nerves, tried to dumb them with alcohol. But alas, the pressure was too great: being down 1-0, having already given what many were saying was our best shot at taking this series. Clank after clunking clank.
Even Melo missed all his warm-ups. I tried not to blame myself, but I couldn’t help it. I knew I shouldn’t have come. I knew I was bad for my team.
The game started much the same way...clank, clank, clank. The fouls started racking up: Tweet! Tweet! Tweet! Even the refs felt my bad energy. The more I complained, the more we complained, the more the refs tweeted. The worse the Nuggets' and our body English became, the lower I sulked in my seat. The more the Lakers “fan” behind us yelled, “Chicken Nugget,” the more hungry I became for fried food.
But then something miraculous happened, perceptive as a switch. Melo decided to play on. But not just play on, but to dominate, regardless of any other force in that very big room. He was done letting their whistles affect him, done with my jitters, or any other jitter in that building. Done being stopped. Unjitterable.
And so there we were, at the end of a miraculous, Herculean effort; a mammoth display of will overcoming nay, of talent overcoming tides, of nervous energy overcome by posture and poise, and of Cuse, being definitively in the house.
The one “fan” who talked trash to us, the really loud visitors wearing yellow and powder blue, actually came up and apologized. So soft. Just like a lot of flappable guys on this town’s basketball team. 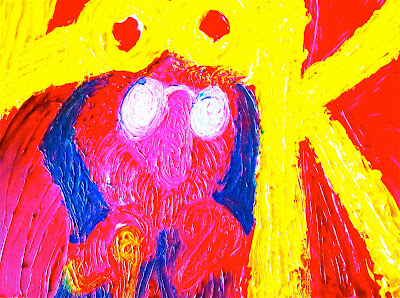 Mundane Jerry thanks you for looking.