Changing It Up Chet 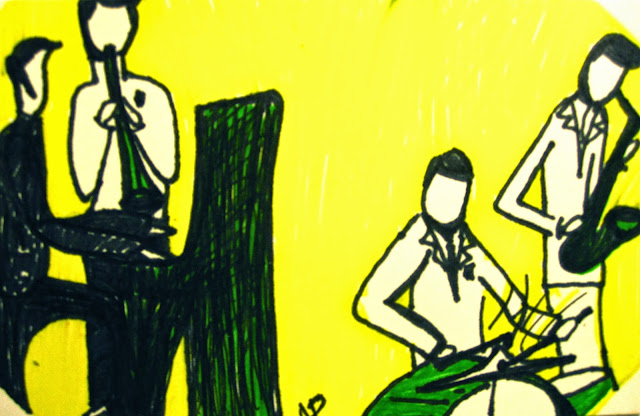 Chet just had a random memory from back when Darcy was crushing his soul, when he was visiting for her graduation, all those years ago. When she was off getting it on with Toby Fucking James.

All the while Chet searched on and off campus for her, stumbling around like a sad sap.

As he looked, he ended up at a buddy's house. They needed a drummer. So Chet sat in. But he couldn't find the groove.

These many years later, that’s why Chet remains just slightly bitter. Cause he couldn’t keep up with a jam. Cause he was wrecked by a woman.

And now he was mad at himself again for letting the time slip a half step. And no recognition of Jason.

"Hey man, you got a dollar or two for bus fare? My car broke down and I gotta get my moms to the hospital."

"You said that to me last time, Man," Jason said.

Well, not full-time. And not like he couldn't get one if he really needed it. Unlike this poor guy.

Still, Jason wasn’t going to give him another ten bucks, regardless of what kind of asshole he felt like. He stormed off towards home, the dog barking in time with Jason's rising blood pressure, neuroses, and fear.

He let him bark; he did just tell off a homeless guy losing another battle to the streets.

Jason walked his ridiculously well-fed dog back to a warm house to eat a lovingly cooked dinner.

And he knew: he was the asshole, again.

But at least he wasn’t out another ten bucks.