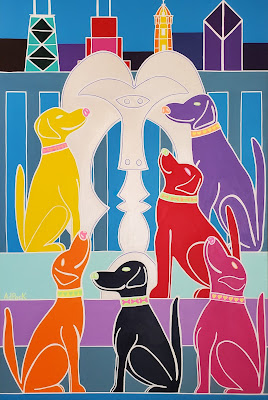 This museum-quality print was created from a 60” x 40” acrylic on canvas commissioned by my dear friend Jay, to honor his gone-too-soon brother, Stevie, a lover of Chicago, City Hall, and Jay’s six faithful labs, specifically painted for the walls at the Ronald McDonald House in Los Angeles.

For those of you familiar with Chicago, you probably recognize most of the landmarks within, including the centerpiece of the painting, The Picasso sculpture prominently situated in the middle of Daley Plaza, where City Hall is located. As a kid born and reared in Chicago (we soon moved to Colorado when I was 6), one of my first memories is of playing on Picasso’s giant sculpture.

I dreamily recall being enamored with not just its seemingly familiar alieness, but also its massive slide, which made that spectacular form awesomely functional as well. As such, it was a welcoming early entry into the world of art that I now try to spend most of my time in. Hopefully that spirit of whimsical accessibility is conveyed in my own homage; certainly the labs surrounding the statue are filled with amused enchantment.

Granted, I couldn’t figure out how to extend a functional slide out of the painting, but hopefully it will help to extend a little moment of joy to anyone staying at the  Ronald McDonald House in L.A., a brief respite from the most difficult of fights. To be sure, it’s a small respite, but it’s something, and that’s something. And with every print sold, that something grows. So head to adpock.shop to help spread a little joy, and hopefully receive some too!