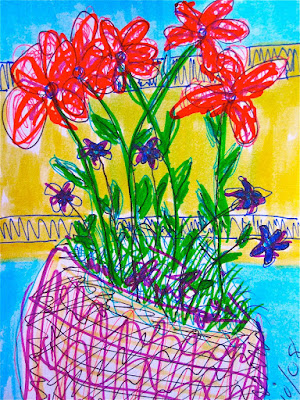 I just repotted this plant I’ve had for at least five years now. When I bought her, in Chinatown, she was a real beaut, her one thick green sprout sprouting all about like it did. Five years is a personal record for me as far as plant maintenance goes. I’m pretty proud of myself, but I’m really proud of my plant. So I decided to reward her with a repotting. (An occasion both of us were previously foreign to.)

Upon initial purchase, my plant was just a wee one. But after five years, three rooms, and countless neglect, she has done nothing but blossom. Where once there was one wee sprout, now there are four hearty stalks. And the new pot is really sleek. With all the newfound space, there’s something about the re-arrangement that has all the makings of an allegory, though I’m not quite sure what it is.

The longest of the sprouts is the leanest. He’s also got the best view, though his space is certainly being crouched upon. I assume he’s also the oldest, though I lost track during that one year I can’t remember. I like to call him Godfather. Sometimes I’ll talk to him like a wiseguy. He usually likes that. I’ll say, “Hey Godfather, how’s it growing?”

The strongest stalk is the fattest. He is the most naturally greedy. He is the fittest. I call him Hardy Sprout. If you look closely, you can see that Hardy Sprout is the baddest man in the pot. He’s the bat swinging alpha male who sees his environment as his resource. And he’s got the sweet core, the peacock feathers of foliage, and the erect posture to prove he’s at least somewhat right. (I even try to water away from him, but he’s too crafty.)

The next healthiest and second thickest stalk is also the shortest. He reminds me a bit of myself: not a lot of flash but good longevity. He’s definitely gonna be with me for the next five years bar some sort of invasion. His name is The Short Guy. He’s my choice if I have to pluck one out of the ground in a hurry in order to replant him as the last ditch opportunity to save his species from extinction.

There’s also one other guy who looks like he’s been there nearly as long as the Godfather, but I can’t think of him as having any Allegorical value.

I do know this about the plant. Where once stood one stalk, which could be sold as a plant (granted there are no size requirements as to what makes a sellable plant in Chinatown), now stand four equally commercially viable sprouts. Sure it ain’t Jack’s beanstock, but this progress is quantifiable. We’re dealing with real numbers, not imaginary computer blips, here. This is as quantifiable a production as anything else in these five years.