A Boy and His Dog and Simon & Garfunkel and Extreme 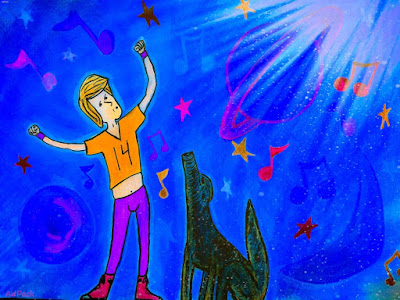 Once upon a time there was a boy who sang as if God we're his ventriloquist.

But along the open road, the boy lost his heavenly voice, he couldn't even be sure where.

One day, the boy found a dog who barked like a hurricane, like the Scorpions kind of hurricane. The rocking kind.

So the boy took the dog in. Unfortunately, the boy was homeless.

The boy and the dog hit the street, the only home that would have them. But it bonded them tighter than any roof could, and they made themselves a home without walls.

Though both had been self-described lone wolves before, now, neither could see the logic in that. They were a pack now, forever.

Though the boy's divine voice still escaped him, he felt the air in his lungs getting stronger with each pack-spent day. Until one day, out of the heavenly blue, it was as if God, the puppet master of fate, reached out once again and put his hand up the boy's butt. And the spirit so powerfully moved the boy, he became compelled to sing gleefully to the wind.

Upon hearing his master's soulful song, the dog joined in too, with a sublime ear for harmony, and just the slightest hint of a German accent.

The dog and the boy came together, and their voices took flight. By listening to each other, as pack members, they easily became one harmonious whole. They started a duet, loosely influenced by Simon & Garfunkel and Extreme.

Like heaven and hell never parted, together, the boy and the dog created harmony so expansive it floated upon the wind of change, and the wings of angels, for all the world to hear.