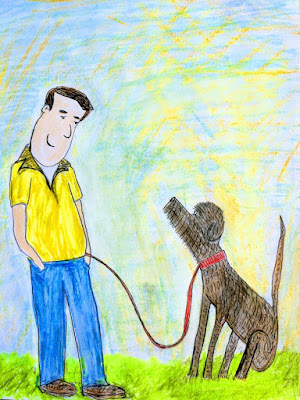 Billy bolts awake with a frown. Nothing like a worry alarm clock. He doesn’t mean to feel uneasy. But feelings have a way.

Physically speaking, waking is just hard. Particularly for one who dreams so deeply.

Fido, on the other hand, chomps the marrow at the bit, runs circles around the dining room table, leash in mouth.

Against such waking instincts, Billy rises. He puts on his pants. First one leg, then the next. Like many a great man, though not many a great Scott!

He slips on his shoes. Grabs the leash and poop bags. After some effort to slow down Fido’s circuitous sprint, Billy finally affixes his leash.

Which means it’s go time. Fido calmly takes his place next to his master, dutiful as a soldier.

They give each other that “go time” look, and hit the street in search of coffee.

Not two doors down, they spy The Scowler. You’d think two people and two dogs who see each other every day could at least do something to acknowledge as much. But that stopped long ago; she can’t be bothered to even scowl at Fido and Billy anymore.

The Wall Lady is a little better. She at least reacts to the duo, even if only to turn her back and build a human wall between her and her little rat dog, whose eyes roll back in his head as his little rat mouth froths with Fido-hating vitriol.

Fido doesn’t react, though, just keeps bopping towards Savanna, the barista with the dog treats.

Billy follows, though he’s sure Fido would like the little rat dog, if they could just get a second to sniff each other’s cute little doggie butts. 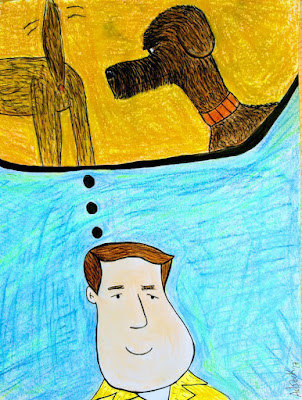 Billy gets lost in Fido’s swaying hips for a spell. Has there ever been a cuter butt in all the land?

Fido barks, though Billy can’t be sure if it’s a response or a warning about the oncoming gardener, blowing the grounds of the Mariposa apartment complex. Billy instinctively bows to the man.

The gardener is deeply involved in his blowing though, and doesn’t return Billy’s nod of recognition. But at least he stops billowing city dust in their general direction.

Billy walks on, thinking about home, where leaf blowers are as uncommon as people who don’t say good morning.

Homesick Billy snaps to in time to yank Fido away from crapping all over the gardener’s handiwork.

A few doors down, Fido finishes up his business when a very deliberate, neon-shoed jogger comes huffing uphill. Billy alertly moves Fido out of the way, then tips his usual “hello, my fellow man” metaphorical cap. 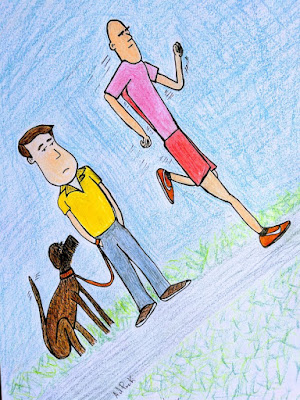 Alas, his fellow man seems very intent on his breathing and doesn’t notice. Apparently, the warm glow stops at his shoes.

Further down the hill, Billy and his dog finally reach “The Crossing.” He is sure one, if not both of them will someday die here.

Not today, though, as Billy only has to eye down one yield-neglecting car before the crosswalk safely opens up. Of course, the driver doesn’t even notice Billy’s death stare.

They cross the street and walk into The Coffee Shop. Their timing couldn’t be worse. Obviously, the CrossFit class next door just ended, because as many yoga outfits fill the painfully long line as business outfits.

Or are they wearing yoga pants to work these days?

The line moves at a molasses-soaked snail’s pace. But not Savanna, she flies around like Ms. Pac-Man on level 141, too busy to acknowledge Billy, or even Fido, her supposed “guy.”

When they reach the front of the line, Savanna plops down Billy’s regular big drip, then notes it in the book. Forget about the fact that Billy was feeling adventurous today and thinking about trying an americano, or something else that might maintain more suitable heat.

Savanna quickly moves onto the next CrossFitter, though. Maybe tomorrow, thinks Billy, as he grabs his lukewarm big drip, wary of the lengthening line, and his place so uncomfortably in front.

He thanks Savanna, and moves on, but she’s enveloped in steam and noise, and doesn’t hear him. 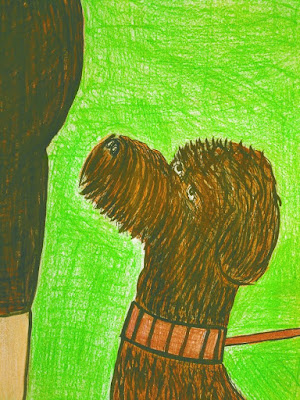 “Come on, Boy. Savanna is busy, she’ll get you two treats tomorrow.”

Billy pulls the forlorn, stubborn, and ultimately heartbroken mutt out of line, out the door, and back to the big bad, treatless world.

Fido and Billy head somberly back up the hill. Now that Billy’s hands are properly full, Fido feels compelled to take another morning constitutional.

Billy drops off the bagged remnants of such in the bus stop trash can, trying his best not to allow bag nor can to make any contact with hand nor coffee cup.

The big Zippy-the-Pinhead-looking fella waiting at the bus stop side-glances Billy, who instinctively smiles. But Zippy goes right back to staring ahead a thousand yards, failing to return Billy’s smile.
Perhaps he’s downwind of the garbage pail and not feeling very smiley.

They walk on. As Billy so often does, he recalls The Pretenders’ “Middle of the Road”. Sings softly to himself, “I got a smile for everyone I meet.”

Lotta good it does, he thinks.

At the top of the hill, almost home, a dark-dressed, dark-sunglassed, scowling realtor struggles with an “Open House” sign. She can’t seem to align it as perfectly as her meticulous eye demands.

Considering her laser focus, obvious ignorance of Billy, and today’s track record, his smile doesn’t initially come out. But Chrissie Hynde sings to the ether, and Billy greets the back of the realtor’s head with a smile just the same.

At least he’s not surprised when she doesn’t smile back. Though he’s still a bit dejected.

But she’s got business to attend to. He can admire that. Perhaps Billy’s own business should be more pressing. Perhaps his debts might seem a bit less severe if he cracked his own whip a little harder.

At least then he’d get down to work, instead of just thinking about how much of his soul he’d lose that day while doing it.

Not that he’s complaining; the value of a paycheck he won’t deny. But there must be something greater to do with his life than slinging bullshit for bullshit artists, who may or may not be nefarius.

Not exactly soul-feeding stuff. So how could Billy genuinely expect people to smile back at him, if his own smile felt forced?

Lost in thought, Bill looks down to find Fido nosing his thigh, indicating for him to look up.
A bolt of sunshine blazes through the clouds, sublimely kissing their lucky shoulders.

“Thanks, pal, good looking out.”

Together, man and dog absorb the splendor.

Who knows how long the rays work their magic, when a high-pitched greeting snaps the spell. 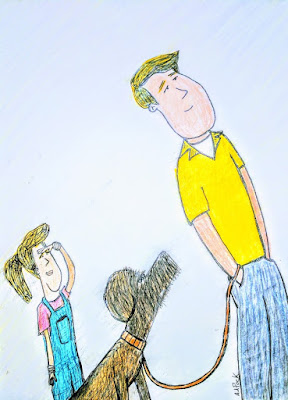 Billy recognizes it sonically somewhere between Alvin and Theodore.

A little girl, June -- running ahead of her mom, name still unknown, both staples along Billy and Fido's morning path -- looks upon sun-worshipping man and dog, and smiles hugely, a mirror to that celestial orb.

Billy looks down; June looks up. They nod in acceptance of each other -- two souls blessed by the same sun.

It makes the little girl’s grin burst, like she's seeing just how big she can actually smile.

Enveloped so, Billy becomes the smile, fills with its exuberance. Exhales his own.

June runs along just as quickly as she came, leaving Billy and Fido glowing in her wake.

Heaven knows, Billy can feel that beam all the way home. All the way through the day, right on through Fido’s afternoon walk.