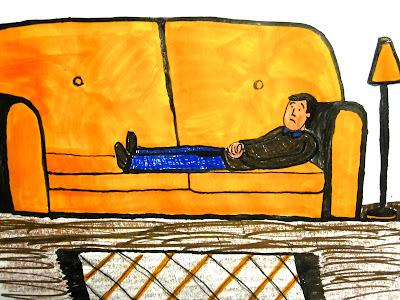 Would that he could, but Alan could not. The world just felt too heavy to move. An anchor. A man of the world, perhaps once, now sunken by it.

Would that he could get up, but Alan had enough of rising. Enough fighting. Enough difficulty. And now the path of least resistance led nowhere.

Was it just laziness? To believe nowhere and everywhere are the same place?

If he couldn’t positively imagine himself rising from the couch, how could he put such an optimistic spin on his current, nowhere yet everywhere state? Who did he think he was? Buddha?

Even Buddha created his own happiness, his own rationalizations. Nirvana is but a state of mind after all.

But how practical is nirvana, given his current state of blasé? He really just wants to have fun. Which can only be done if everyone around him is having fun. Can fun even be if no one's around to have it?

Not like that. Would that Alan could live in that moment…

But it doesn’t last. It never has. A necessary law of nature?

So maybe that’s what he’s really seeking after all?

But to find as much, he’s probably going to have to rise.