If Pigs Can Fly 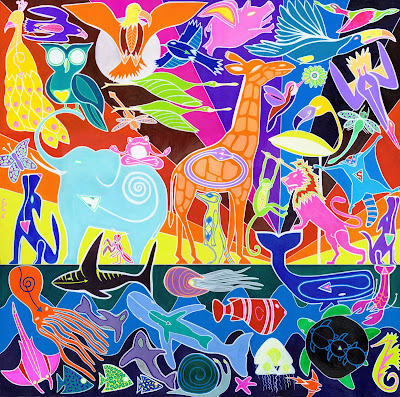 The piece above was made with love and healing vibes for the kids and families that stay at the Ronald McDonald House in Los Angeles, so they can have something joyful to look at, and hopefully be inspired to believe that if pigs can fly, then they can get better.

As a middle aged man, I wouldn’t want to jinx my future self by saying the painting this print is based on is my masterpiece, but it’s certainly the best I’ve done yet. Granted, with all the time, energy, and love I put into it, I’d be pretty upset if it wasn’t.

The funny thing is, the painting wasn’t even my idea in the first place. My dear friend Kerri was talking with her rad Uncle Jay about what to do for his amazing wife Melanie’s big birthday, and they came up with the idea to create some art for the newly remodeled Ronald McDonald House, which Jay and Melanie hugely support. And since there wasn’t enough art on the walls, that seemed like a good place to start.

Not sure if I’m Kerri’s only artist friend, but I’m definitely her oldest, so she convinced Jay I was the man for the job. Now she just had to convince me I was capable of taking all the animals I’d been creating separately and putting them together into one big piece.

Which now seems like a great idea -- with sea creatures, land creatures, and sky creatures (including one soaring pig) all taking their proper places in the 6’ x 6’ triptych -- but at first I was quite daunted by the prospect. See, I’m not a trained painter, and had never worked on anything so big. Heck, I still feel like I’m flying by the seat of my pants everytime I start a project (though I do have some weird innate confidence in the fanciness of said pants).

So flying was apparently always a theme. And I have drawn a lot of birds in my life. And pigs flying are on the first and last page of my MFA thesis script (which has since morphed into a novella, if you’re interested in publishing it). So perhaps this piece was waiting for me to paint it all along?

However it unfolded, I’m extraordinarily grateful for the opportunity, and for the faith that Kerri and Jay had in me to see it through, especially since I had so many doubts myself. In the end though, it was thinking of those kids that forced me to overcome those doubts. Every step of the way I was motivated by them, fighting for their lives, while hoping that my spirit could help in the smallest way to aid them in that fight. That’s why I’m sure it’s the best thing I’ve done yet, because I didn’t do it alone.

With Kerri and Jay's prodding and help, I had a run of 20 beautiful prints made from the piece, the first professional prints made from my work (which was a whole ‘nother learning curve). If you'd like one, you could also aid in that fight, as a portion of each print sold at adpock.shop goes to the Ronald McDonald House Charities.